Lets start with-- Story of Avial 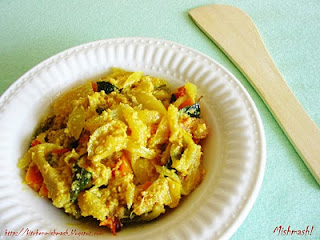 Picture courtesy: Kitchenmishmash
According to Wikipedia, Aviyal or avial  is a dish that has a unique place in typical Kerala as well as Tamil cuisine. It is a thick mixture of vegetables, curd and coconut seasoned with coconut oil and curry leaves. Aviyal is considered an essential part of the Sadhya.(traditional feast of Kerala served in banana leaves = yum heaven).

Indian cuisine especially Kerala cuisine is a mashed up version of a lot of cuisines. Because of the interaction and assimilation with a lot of cultures from time immemorial, food in our land has undergone a lot of changes. What better way to welcome a visitor than offering them the food they love?

Avial essentially means ‘to be cooked’. Colloquially, it also refers to a mixture of anything and everything. I could not think of a better dish to start with-since we are celebrating food and understanding all the different ways it could have come to us.

So, trivia time- There are different stories surrounding the origin of Avial.

Version 1  says there was a random king who didnt like to waste anything and when he saw leftovers of cut vegetables getting wasted,ordered the chef to make use of everything. The imaginative chef apparently invented the dish Aviyal.

Version 2 which is a more elaborate version than first one is more interesting. According to this legend, aviyal was invented by Bhima ( remember the big strong Pandava in Mahabharata). Apparently, during his exile in the kingdom of Virata- he was in the disguise of a cook and obviously being the macho warrior he knew zilch about cooking. So he did, what some of us did in our early days of cooking. Chopped up different vegetables, boiled them in water and added grated coconut. And thank his lucky stars, the dish became a hit and thus Aviyal was born.
This version is often mixed up with Version 1 and embellished making the king of Virata the thrifty king who didnt like wasting and Bhima the imaginative cook. But I guess it was just a Chinese whispered tale.

No matter how interesting the story may seem, many find it difficult to believe it since Pandavas apparently was crisscrossing only parts of North India during their exile and  Virat kingdom is somewhere near present day Rajasthan. Critics ask, if the story was true- then how come Aviyal is mostly a South Indian dish. North Indians generally don't eat Aviyal as a part of their regular cuisine unless they have gotten inspired by their South Indian neighbours next door. I have my wild theories regarding that- but since I dont have historical backing and its just a wild story let me complete with all the versions of Aviyal history and get to my imaginative history.


Update on Version 2- Tharakan Sir from Parayil blog also puts forth an explanation which indicates that " it is believed that the Pandavas spent a considerable time in Kerala during their year of hiding after the vanavasa (living in the forests) of 12 years. If they were recognized during that period the cycle of vanavasa and hiding had to be repeated. They had to be very careful to remain incognito. While the other Pandavas were satisfied with living on fruits etc., Bhima’s appetite required more solid food".This possibly is an alternate explanation for the ubiquitous presence of Aviyal in Kerala, but again its a myth which at the moment I dont have historical facts to back up with.

Version 3 comes from Kottarathil Sankunni. Those who dont know him- He is the author of Aithihyamaala ( basically a compilation of lores and legends of Kerala).The Maharaja of Travancore used to perform Murajapam (kind of an elaborate pooja (ritual) with lots of Brahmin pundits I guess) every year, a vedic seminar, in which a large number of vedic scholars participated. One year it so happened that there was no vegetables left on the last day of the Murajapam.. Only few pieces of various vegetables left over from the previous days were available. The cook cut all the left overs into long thin pieces and prepared "Aviyal." The king liked the dish so much and presented him with a gold bracelet and ordered that this dish be served every year since then.

Regardless of which version is true, all of them are interesting-dontcha think??

So now comes my wild analysis of it all- keeping in mind the Bhima version is true. ( The below version of the evolution of aviyal dont have any historical backing. Though, all the facts described unless stated otherwise is true).
Avial is also a common dish found in Tamilnadu and Andhra Pradesh. I am not sure about Karnataka-so help me out there. Infact, Avial and Adai in Tamilnadu is a widely sought out delicacy.

If you already didnt know it, Avial is primarily a Nair delicacy. There is even a saying in my place, which almost translates that Aviyal is no Aviyal if a Nair didnt make it. ( And we have been told my dad who is a pukka Christian makes a mean Avial compared to all the Nairs in our area. Glee!.:)). Anyways who are these Nairs?

They are our very own warrior class of Kerala known for their exceptional cooking skills ( That discovery is from me based on purely oral folklore-Comment if you know anything more.)The 17th century Brahmin-inspired  Keralolpathi (origin of Kerala) and the Grama Padhati of Tulu Brahmins describes the Nairs of Kerala and the similarly matrilineal Bunts of Tulu Nadu as descendants of Kshatriyas who accompanied the Brahmins to Kerala and Tulu Nadu respectively from Ahichatra/Ahikshetra in northern Panchala. (which is in present day Uttar Pradesh). So could it be that the Bhima story is true and the Nairs actually came from North India with the secret recipe ( ah, well not so secrety, come to think of it) and popularized in South India?

Could it also be descendants of Virata kingdom, which is originally founded by fishermen community who later attained kingship migrated to the Southern coastal regions and carried the recipe of the prized dish with them?? ( This assumption has no historical backing)
Whichever ways it is, I am sure it was an interesting ride for the Avial. For such a simple and humble dish, who thought it will have so much of stories behind it.

And it aint over yet.

Like any other dishes, it also has variations in the way its prepared in different regions. I can only speak for some regions and about Kerala, so feel free to add more if you guys know about it.


The traditional aviyal generally uses common vegetables in Kerala like Plantain(Ethakka),Elephant Yam(Chena),Long string beans(Achinga Payaru),Snake gourd(padavalenga),Cucumber(Vellarikka),DrumSticks(Muringakka) ,Raw Mango(Pacha maanga) and Carrots.In northern Kerala they even put Bitter Gourd(Paavakka) .
There is a significant difference in the way Avial is prepared in South Kerala compared to North. I never knew it till I ate Aviyal from a friends place in Cochin. In South Kerala, garlic is added while grinding the coconut. And sometimes instead of curd, tamarind or raw mango pieces are used. Thats how it is done in my home in Kollam, but I love the curd version of Avial.


Update on regional differences- In some parts of Thrissur, Aviyal is made very watery instead of the usual dry version.The vegetables are allowed to cook till soft, the coconut is grounded to a smooth paste with  liberal quantities of water and buttermilk added. As a final touch, a couple of smashed pearl onions will be dropped into the curry, giving it a delicious flavour. And my friend from Karnataka had shared that there is an adaptation of the avial that you see in the coastal belt (Mangalore region) where the cuisine has Kerala influences. It is more like a gravy though.


So anyone coming across these recipes, please do let me know.


In the traditional aviyal, all vegetables go in it, except perhaps, some mushy vegetables, like, tomato, brinjal, ladies fingers, cabbage, cauliflower, beetroot (it stains the dish), radish, turnip, onion, sweet potato, etc. Ever wondered why? It also gives us the answer why a Brahmin wouldnt put onion in Avial ( ofcourse must have been in the older days). Thats because most of these are foreign vegetables which was brought to Kerala either through traders, tourists or invaders. And at one point of time, those were considered to be impure.

Last trivia for the day For example, the big onion which we lovingly call us as 'savola' back home came from the Portugese. Go to Brazil or Portugal, they call the big onion- cebola. Makes sense?

More about this later--

For all you know, they must be making avial at their homes.:P. Just kidding!.

After all this aviyal talk and no recipes..dont kick me-- there is from 2 lovely food bloggers who often come to my rescue in days of need. I have tried out both the recipes and they are awesome.

Love it for the detail and precision.If you're cooking for the first time, way to go recipe and trust me, its totally worth following everything. I got my first pat on the back for cooking from guests for that.

That recipe makes it all sound so easy, and when you do it- it actually is..

A big thanks to Mishmash, Varsha and Maddy for the inspiration and support and letting me use your precious babies (known as blog posts)

Note:  I have used the recipes and pictures of bloggers who have given me permission to do so.I know how much of an effort it takes to be a food blogger and I respect it. If you would love to showcase your recipes or post your pics, it will be my pride and pleasure to do so. Do leave me a mail or comment if you are interested in being part of this. The more the merrier.

Wanna know more about Nairs. Maddy has a different version about how Nairs came into Kerala- From Scythia. He goes and analyse a little more far behind. Check out Maddys blog which gives you a detailed review.
Posted by Jina at 11:44 AM

Ask before you copy

This work is licensed under a Creative Commons Attribution-NonCommercial-NoDerivs 3.0 Unported License.